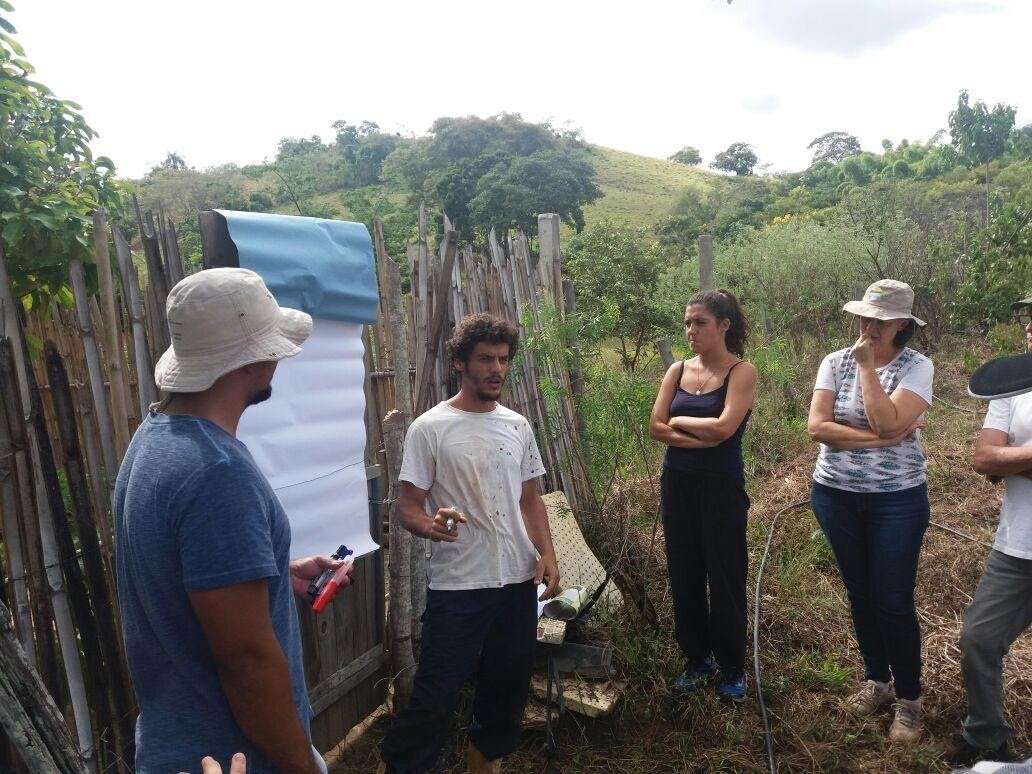 Agroforestry: The Solution to Drought and Poverty

The state of Rio de Janeiro suffers from severe environmental degradation in its northwestern region. Its population is facing intense drought and lack of water. This region of Brazil has the largest areas without vegetation around rivers, lakes, and springs, and has the lowest human development rates. Therefore, actions to improve the region’s socio-environmental situation, such as more sustainable agriculture combined with environmental restoration, are essential. Agroforestry plays a fundamental role in this challenge, since the method is capable of restoring degraded soils to provide water, food security and improve quality of life.

Several initiatives among public-private organizations were developed between 2010 and 2018 in this region with the aim of strengthening and benefiting their organic production. In 2010, The Brazilian Micro and Small Business Support Agency – SEBRAE, established organic food production units through a system called Integrated and Sustainable Agro-ecological Production (PAIS), implemented in eleven municipalities and encompassing 255 units. This special type of production is characterized as a circular vegetable garden. In the circle’s center, small animals are bred, such as free-range chickens. The manure produced by these animals is then used to fertilize the garden, which surrounds the chicken house in concentric circles. In addition, the certification of 90 PAIS farmers from 15 municipalities was also promoted through thematic workshops that trained technicians and farmers to exchange knowledge in agroecology and organic production.

However, although circular crops are more sustainable than conventional agriculture, they still demand excessive water use, making it difficult to maintain investments in a region with long periods of drought.

Agroforestry Systems have proven to be much more capable of promoting greater water storage and production. In addition, Agroforestry Systems present great potential for nature restoration and conservation, along with high agricultural productivity in the short and long term. In general, agroforestry gardens are planted in parallel rows, one with fruit trees and biomass trees providing organic matter and 2 to 4 rows of vegetable gardens. The rapid growth and efficient production of Agroforestry soon required maintenance workshops, making pruning and other activities necessary. Pruning is important because it incorporates the organic matter into the soil and simultaneously maintains its moisture, thus reducing the need for irrigation and extra fertilization, as well as allowing light to enter the system.

Although it requires a certain amount of physical vigor, overall, the management of these systems requires less labor. The system is self-supporting and does not require as much intervention as a traditional crop system. Lower labor costs also improve family income and facilitate expansion of planted areas.

Agroforestry is a success

In 2015, the first workshops about Agroforestry took place with the participation of several Brazilian entities such as EMATER-Rio, Pesagro, SEBRAE, and rural producers. Agroforestry brings together vegetables, fruits, shrubs and forest trees, providing crops from the first month of implementation. There is continuous production over time, made possible with the help of pruning to rejuvenate the forest that is in formation. This pruning ensures the entry of light and organic matter into the system, enabling the production and harvesting of a greater number of products at different times of the year. Thus, this dynamic offers both work and income for entire families on a permanent basis.

These workshops were able to raise awareness among participating farmers who were interested in implementing Agroforestry or Forestry gardening on their farms. The farmer Márcio Fonseca was the first of the group to adopt a new system.

Before the implementation of the Agroforestry System, Márcio used to work with conventional agriculture in his father’s garden. He became sick due to the application of pesticides. In an environment with heat and drought, his land was basically used as a pasture. The wells were their water source but the water levels had been dropping year after year, and even dried up in some periods.

Implementing agroforestry brought water back to the wells, which remain full enough to sustain the project and meet the needs of the daily life of Márcio’s family. Now Márcio has his own business and his wife and children have become involved in this work. His children help him in the afternoon when they return from school, and his wife works in the planning of trade and sales of products. In times where leaving the countryside is the most common scenario for the young generation, the participation of the young members of this family is a reference point for hope; continuing life in the countryside is possible with the option of expanding this system in harmony with nature.

On the lands of Márcio, there is currently a planted area of about 5,000m² where sweet potatoes, cassava, yams, bananas, and coffee are grown. These are sold directly from the farm – his daughter participates by creating an information and sales network through Whatsapp. Some of their produce is even delivered to schools.

Another farmer who implemented the Agroforestry System is Genilson Gonçalves, whose parents initially worked with traditional agriculture: sugarcane monoculture based on fertilizers and chemical pesticides coupled with a pasture and animal husbandry. With the workshops, the family started to produce food from agroforestry systems.

Genilson says that the results are excellent, because he can now produce several products in the same area, such as cassava, okra, passion fruit and vegetables. According to the farmer, productivity is much higher, less water is wasted and a new water source has even emerged in the area! The entire family is involved in the work: his father helps in the plantations and harvests, and his wife, who returned to work in the field when the Agroforestry System was implemented, participates in the harvests and sales, which take place in fairs and via WhatsApp.

Both Márcio and Genilson emphasize the improvement of the quality of life, health, landscape and environment of their sites, which now have a milder microclimate and available water. The wild animals are returning and the happiness about the reintegration with nature is evident in their voices. They feel and perceive the privilege of having acquired a better quality of life and well-being in a region degraded both environmentally and economically.

The third Agroforestry System was implemented in the lands of the agronomist Ana Bittar, who with her knowledge and experience, offered support to many farmers interested in making this agroecological transition, as was the case of Genilson. Ana, who also participated in the workshops as a guide, was impressed with the speed, quantity and quality of production. In less than 6 months from the beginning of planting, the professional had already created four sales channels for the new production. Currently, she participates in fairs throughout the year, presenting at least 18 different products. Ana reports that for three years there have been uninterrupted organic fairs throughout the northwest of Rio de Janeiro, and that the number of home deliveries is also increasing.

These three implementations were a success: the initial area was 2,000m² per property, but each area was expanded by the farmers themselves. The results were quick, a real production boom which exceeded expectations, inspiring and stimulating many other farmers to participate in the project. In one year, there were already 10 Agroforestry System units in place. In 2016, with all this success, SEBRAE obtained financing from the Banco do Brasil Foundation for the acquisition of equipment and agricultural consulting, further stimulating the implementation of Agroforestry in the region with 30 new units. This investment even encouraged some farmers who had previously abandoned their agricultural activities, but with this incentive, they started planting again.

Although it is a good work proposal and solution for the farmers and the environment, the agroforestry gardens were not developed further. However, of the 40 farmers who started production in the form of Agroforestry, 15 maintain at least some learned concept, especially regarding soil cover with organic matter from pruning and crop diversity.

The Assistance Program for such implementations ended in 2018, reducing or ceasing workshops and technical support to farmers in this region who still need permanent guidance. Continuity of the technical monitoring would enable the improvement in accordance with the specificities of each area. The farmers state that the workshops are fundamental for the exchange of knowledge and experiences, as well as to maintain and increase the motivation of farmers. Seed exchanges are also essential, since access to them and organic seedlings is one of the main difficulties for the success of the business.

Applied research programs specific to each local crop and soil situation could also contribute to improvements in yields by assessing the details of each situation. Public policies, which already exist and have been partially applied in the process, could be expanded, continued and used more efficiently. Both research and policy have the potential to contribute, for example, to better production of organic seeds and seedlings as well as native species.

Training in entrepreneurship and sales, according to producers, would also be very important to improve and expand the flow capacity, making marketing more professional, and improving family incomes. The dissemination and orientation initiatives were mainly made by Pesagro and SEBRAE. Márcio, who was able to obtain a good sales index at the beginning of the implementation of his forest garden, reports that he is currently experiencing financial difficulties once more.

Despite the difficulties, the success of some initiatives continues to be evident and deserves sharing, so they can serve as inspiration for similar actions in other areas of northwestern Rio and other low-income and degraded regions. The Agroforestry plot of Genilson and his parents, for example, is a showcase for this project. It is much visited by other farmers in the region, and even throughout the state. During these visits, those responsible explain and reveal all the knowledge acquired during the implementation of the project and express a contagious spirit. Several farmers from the northwest are waiting for this implementation.

The groundwork has been laid. Now it is time to re-articulate these actions so this successful and promising initiative can be expanded and maintained, bringing all the good that Agroforestry has to offer to a region that needs so much.