reNature seeds in Java and Sulawesi

Our first blog article introduced the work of our team in Bali, and especially further east on Lombok island where a highly degraded land of 1,2 ha awaits to be regenerated. The first two weeks were packed with exploring, learning and sharing. Nonetheless, we only examined the surface of Indonesia – the country of many islands with its colorful beauty and diversity of land, people, and culture. This chapter will bring us over to Java, Indonesia’s most populated island and location of the country’s capital, Jakarta.

This is where one part of our team headed to visit the Bogor Agricultural University (IPB).There, reNature was welcomed by the International Association of Students in Agriculture and Related Sciences (IAAS), to present our project for its young and curious members, and to discuss Indonesia’s specific legal, economic and cultural framework for implementing agroforestry. Leaving the lecture room, we felt even more energized and motivated than before. Getting to know so many students from different disciplines who recognize the benefits of agroforestry strengthened our perspective on the youth as crucial actors and inspired us to set up further cooperation with the academic world. 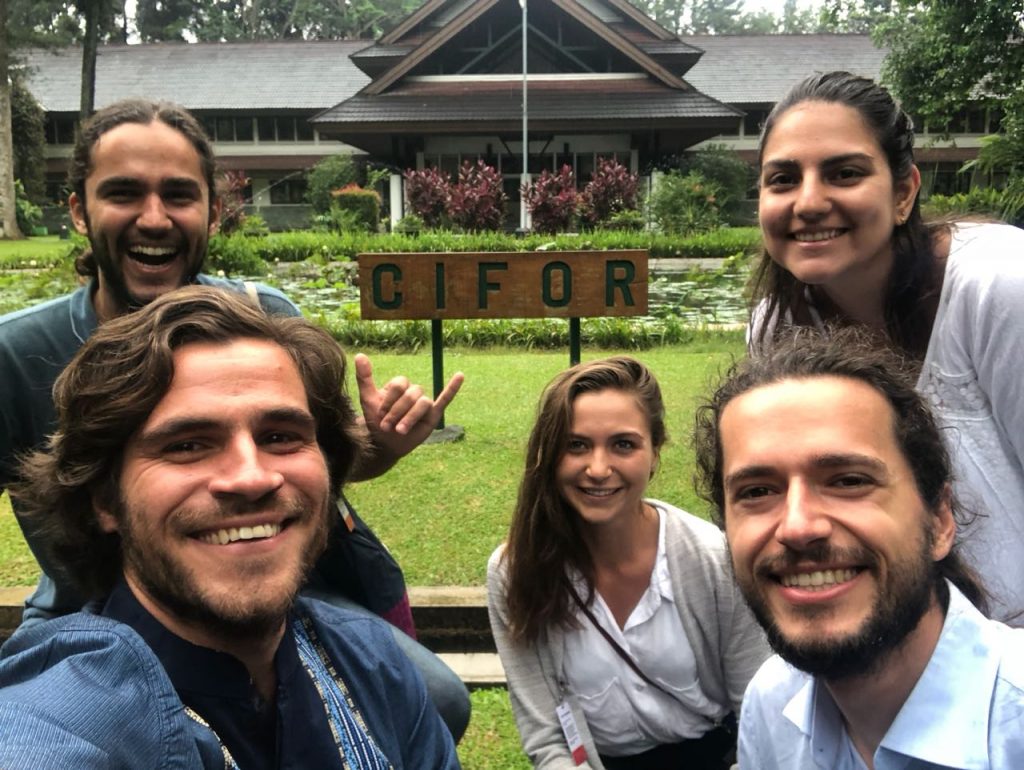 Thanks to the association’s network, the team got acquainted with the leader of a farmer cooperative in Cikarawang village which produces organic sweet potatoes and cassava. Even though ‘organic´ here still implies monocultures and the constant input of (organic) fertilizer from outside, the cooperative and its delicious organic sweet potato muffins are pioneers in the region – or just the ‘new´ old-fashioned way of producing food.

The next day, we found ourselves in the warm rain in the middle of a wild forest, where theWorld Agroforestry Centre (ICRAF), and the Centre for International Forestry Research (CIFOR) set up their research facilities. Although our meeting did not take place in their Amazon Room, we were able to bring the Brazilian vibes by telling about ReNature’s roots and Ernst’s Götsch’s 500ha agroforestry in Brazil. While ICRAF seemed to get nourished by our young spirit and energy, we were inspired by the methodology of their mega-project AgFor in Sulawesi. A memorable meeting, in which the basis of a promising partnership was laid out. It has been part of our planning for a while to visit ICRAF’s AgFor sites and luckily, we got in touch with another organization that does excellent work on the same island: Rikolto, a Belgian NGO that organizes Indonesian farmers on the local and international organic market. Clearly, Sulawesi was a place for us to go.

And so it happened that we were sharing the room with Rikolto’s partner cooperatives only three days later, at their Local Partner Meeting in Sulawesi’s Toraja region. The ensuing coffee tasting session gave us not only an energy boost in the morning but also a deeper insight into the NGO’s structure and network. During the three days of interacting with farmers, cooperatives, the local government and Rikolto themselves, exciting plans for significant partnerships brewed. Following the Rikolto experience, we rolled straight into the visit of ICRAF’s AgFor sites in southern Sulawesi. This large-scale project really seemed to have been ‘fruitful’ after five years of implementation.

A major focus of ICRAF is improving the actual agroforestry techniques, and indeed the system we saw struck us as the best we had seen in Indonesia so far. An interesting key aspect was their field school, where local farmers got trained to train other farmers with the new techniques. We had a great knowledge exchange with this crew who was very open to sharing, but also interested and receptive to learn. And what’s the best way to do this? We took up the shovel and machete and actually got our hands dirty. We realized that both sides had a lot to add to each other and together we may build an even more beautiful system. The difference in methodology and focus between both organizations we visited on the island revealed some important insights. Most exciting of all, the insight that reNature can have a relevant role in the story. A story to be continued…

A Sarong for the Earth

As the cherry on the top of reNature’s Sulawesi pie, we were granted access to Tanah Toa, a traditional community that rejects all modern technology. These people have a unique bond to their natural resources and sacred forest, which we hoped to learn from in our mission. We had the privilege of meeting Ammatoa, the village chief, and a real character, in his bamboo home. “Trees make rain, make life in the soil, protect the soil. Without them, the planet is naked. They are like a sarong for the Earth” he said, pointing at the traditional cloth garment wrapped around his waist. He went on to tell us the story of his people, who have been stewarding the forest since the beginning of time. Moved by this beauty, we told him that we actually came to Indonesia with the mission to help other communities restore their sarong, which many have lost. “A very important mission,” he said with his charismatic smile, and added: “Do it together, and communicate your message well!”

We could not agree more with Ammatoa’s philosophy and golden advice, which seemed to come from a different age and world, from deep inside the Earth. It resonated with our core, with the essence of what reNature stands for. After the first month of our project, the three presentations, twelve meetings, all the smiles and hugs, the positive responses, the people we connected, and plans we started, we looked back and realized: this can really become a beautiful sarong.

Read our first journal on our project in Indonesia