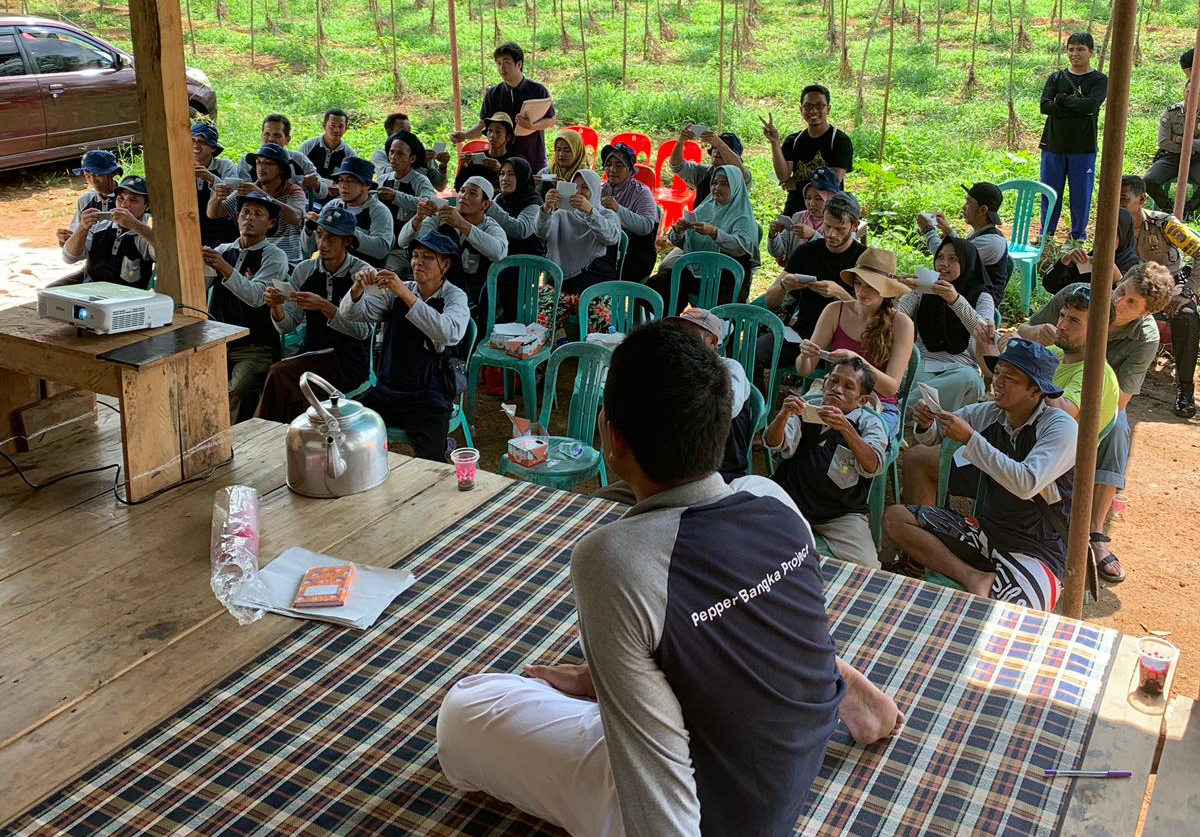 Indonesia is known a unique set of ecosystems characterized by abundance and diversity. Unfortunately, it is also known for severe deforestation and forest degradation mainly driven by industrial agriculture threatening this eco-paradise. The underlying reasons often lie in socio-economic aspects such as poverty. reNature is promoting Regenerative Agroforestry in the country as a major solution to these problems and an economic opportunity for smallholder farmers.

After Brazil and the Democratic Republic of Congo, Indonesia is the world’s third most forested country. This is even more astonishing given that the country consists of more than 17,000 thousand islands.

Indonesia’s geographical situation provide it with a unique diversity of animals, plants, and landscapes making in the third most biodiverse country in the world. It provides habitats for elephants, rhinos, tigers, bears, and orangutans. Further, many of its species are endemic – they do not exist anywhere else – which truly makes it a special place.

Indonesia’s rainforests are also precious carbon pools. They store carbon in their biomass and in the soil preventing it from entering the atmosphere and fuelling global warming. Their conservation is vital for the mitigation of climate change.

Even more potent in absorbing and keeping the most prevalent greenhouse gas out of the atmosphere are the peat forests. These store twice as much carbon as rainforests per hectare. Indonesian peat forests alone store a staggering amount of at least 55 Gt of carbon – 2% (!) of all carbon stored in the world’s ecosystems on land.

For decades, Indonesia’s nature has been and still is confronted with deforestation, ecosystem degradation, and unsustainable land use. It is currently subject to one of the highest rate of deforestation worldwide.

These developments have grave consequences. Due to the loss of habitat, many species in the country, such as the sumatran tiger or the the orangutan, are now at risk of extinction. Out of 515 mammals, almost a third are already endangered – many of them critically.

But animals and plants are not the only ones affected by deforestation. With their biodiversity dwindling, ecosystems may collapse, and with it vital ecosystem services benefiting humans. Next to providing food, biomass, building materials, and other valuable resources, the Indonesian rainforests produce clean water and air, regulate the microclimate, and ensure vital rainfalls for farmers.

The disappearing of Indonesia’s ecosystems already has consequences on a global scale. It has already been linked to global warming, air pollution as well as economic losses exceeding local levels.

The role of agriculture

In Indonesia, there are a number of drivers for the destruction of ecosystems. The most infamous one still is the spread of large-scale industrial plantations, especially oil palm, which replace pristine rainforests. Next to oil palm, a number of agricultural commodities play an important role in the country: Indonesia is a major producer of natural rubber, vanilla, coconut oil, rice, cocoa, coffee, and tobacco, as well as tropical spices.

Yet, large-scale plantations of oil palms and other commodities only account for two fifths of deforestation in the country. While efforts to improve the ecological value of those plantations have recently increased, many other drivers have been identified. Those include timber plantations, wildfires turning forests into grass- and shrublands, smallholder agriculture as well as mining and logging.

Agriculture and land use stand out as being most harmful for Indonesia’s ecosystems. Worth mentioning is also the role of grass- and shrublands in the country. These result from wildfires following extra-long and intense dry seasons that ravage ecosystems, especially peat forest – such as mangroves. With the devastation of these ecosystems taken into account, Indonesia is one of the biggest carbon emitters globally.

Climate change is already intensifying dry seasons which makes those fires more likely. As mangroves and other peat forests burn, fires accelerate climate change as tons of CO2 are being released into the atmosphere creating a vicious circle. Deforestation further intensifies the risk of fires as it leads to fewer rainfalls and reduced water availability.

Agriculture, deforestation, and the climate therefore stand in a complex, direct relation to each other.

Reversing the damage through agroforestry

As much as it currently embodies much of the problem, Indonesian agriculture can also be the solution. When done in the right way, it can be used to reserve the damage done, restore destroyed ecosystems, and make them more resilient to future challenges – all while generating food and income.

This way is called Regenerative Agroforestry.

It would be especially effective in creating alternative solutions for Indonesian small-scale farmers – one of the major deforestation drivers. These could produce more food locally on smaller areas of land through increased efficiency and productivity, thus, reducing the need for further deforestation.

Agroforestry can also be done in existing forests as a conservation practice. It assigns an economic value to the forest and its commodities creating financial incentives for farmers to preserve natural ecosystem. This way, it makes deforestation redundant. In Ernst Götsch’s words: ‘We must work to create areas of permanent inclusion of humans and animals, instead of areas of permanent protection from them.’

It can also boost the ecological value of farms benefitting endangered species. Agroforestry systems provide habitat to a much greater variety of life compared to conventional monocultures. Further, they increase water availability and rainfalls, thus, reducing the risk of drought-induced fires.

Most of Indonesia’s major commodities such as palm oil, natural rubber, rice, vanilla, cocoa, and coffee have proven to grow very well in agroforestry systems. Considering the size of the country, the economic importance of agriculture, and the emissions linked to deforestation, the potential to drive positive change in Indonesia is immense. A promising example is our white pepper project on the Island of Bangka improving the livelihoods of local farmers, whilst benefiting nature.

In Indonesia, it has already been practised on smaller scales on the community level – in so-called home gardens. These are very diverse, used to produce a variety of food commodities and often include livestock. Social interactions as well as spiritual values also play important roles.

While those home gardens are thought to have existed for several thousand years, large- scale Regenerative Agroforestry is not yet common in the country. However, it is being increasingly being recognized for its benefits.

The number of projects, farmers, and companies adopting agroforestry practices of different forms is rising. Yet, to reach the agricultural mainstream and effectively reverse the damage of deforestation, more work is to be done. 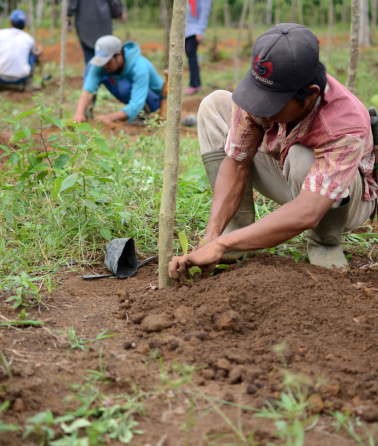 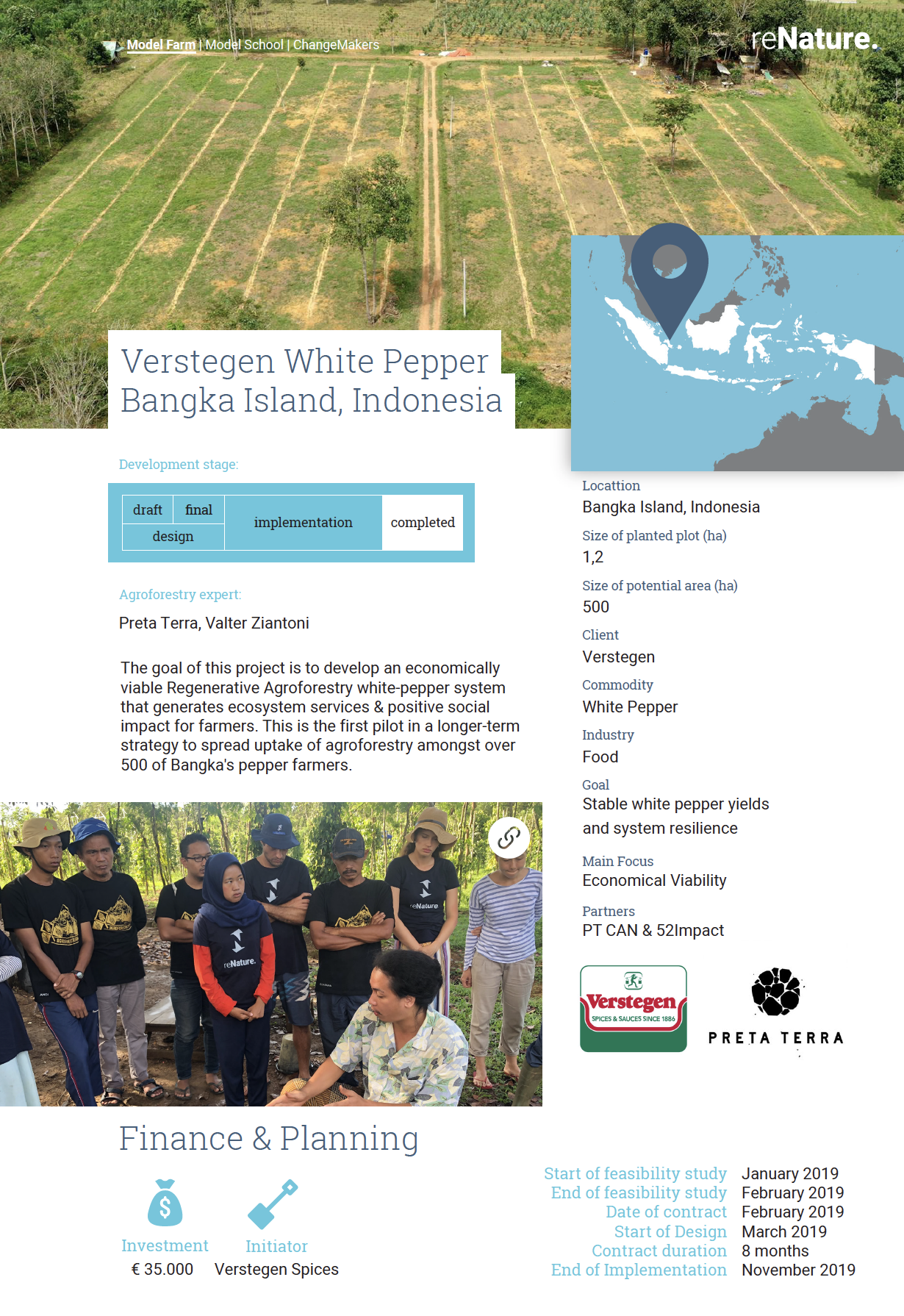