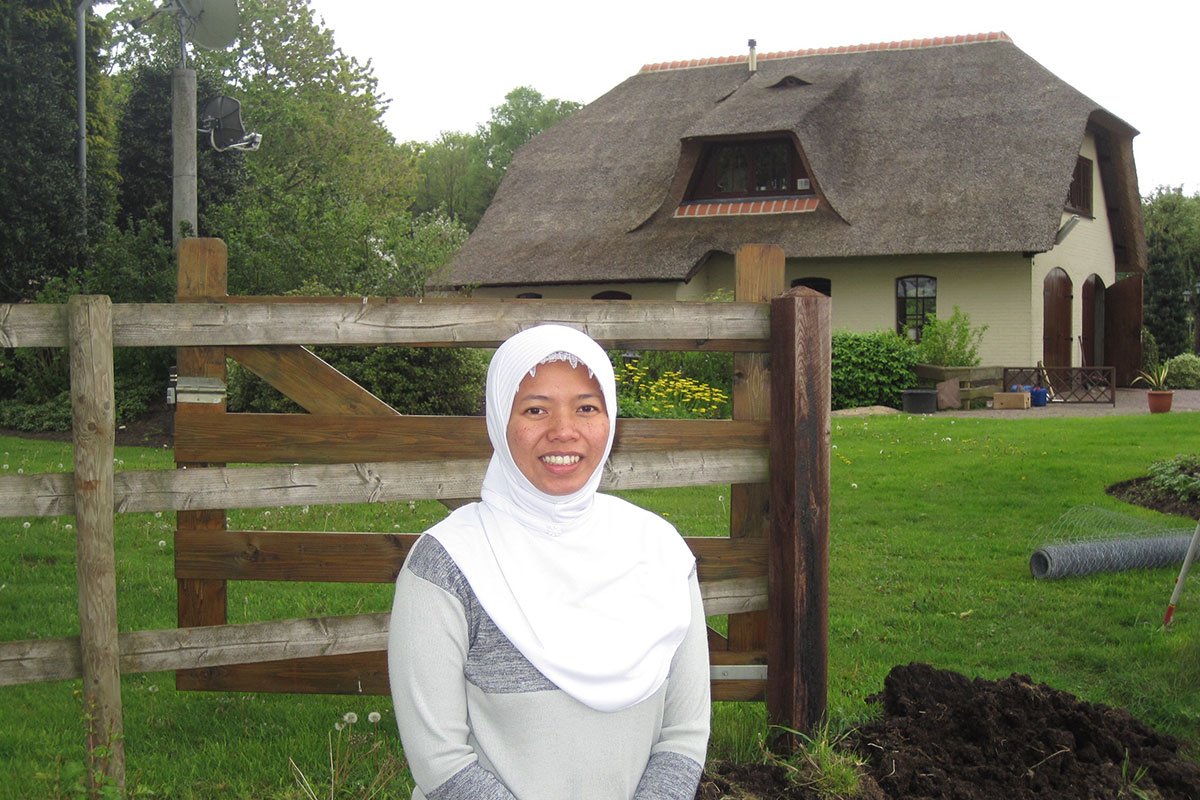 A standard Indonesian rice field may look pretty with a mountain backdrop. But these one crop agriculture systems are not future proof. The extreme weather we are facing due to global warming asks for more resilient systems that restore ecosystems rather than deplete them. Ph.D. candidate at Wageningen University & Research Uma Khumairoh shows that a polyculture with fish, ducks, water ferns and rice is a more resilient and, at the same time, more productive system.

Indonesia has already suffered from changing weather patterns. Although the country is the third largest rice producer worldwide, it had to increase their rice import with 44% in the last couple of years, due to the growing population and disappointing harvests. The weather changes could also cause more weeds, diseases, and pests in the Indonesian rice fields. Since it is expected that climate change creates variable weather conditions ranging from droughts to floods, food security is in danger. The need for a resilient and sustainable agriculture system rises.

Khumairoh did her research on a polyculture with rice, fish, ducks and water fern in four different regions in Indonesia. She compared the polyculture with conventional rice fields and organic rice fields. Conventional agriculture had a higher yield in normal weather conditions. But the yield decreased dramatically in extreme conditions. The organic rice production had a smaller harvest but turned out to be more resilient in harsh conditions. The results of the mixed farming system, however, are groundbreaking.

Not only was the system the most resilient in extreme weather, but it turned out to be the most productive compared to the conventional and organic agriculture. This robust form of agriculture with higher yields and without the use of pesticides or artificial fertilizers could be an example for all the rice-producing countries. The research was recently published in Nature Scientific Reports.

How does the polyculture function?

Combining rice, fish, ducks and water ferns appears to be a better alternative than the monoculture of rice (organic or conventional). This polyculture does not need artificial fertilizers or pesticides. The ducks and fish eat Azolla and insect and crab pest. Duck feces and water ferns provide nutrients for the rice plants and the ducks and fish eliminate pesticides and herbicides, ensuring the natural enemies of rice pests can settle. The plant roots of the rice can soak up nitrogen better when the ducks and fish move around in the rice field to circulate oxygen. Khumairoh found a win-win combination.

I spoke with Uma Khumairoh, who is currently in Indonesia, about sustainable agriculture and all its benefits. “I like to work on participatory, experimental farming together with farmers,” she says through Skype, “so that they can observe and give feedback as well as adopt research findings very quickly in their fields.” For Khumairoh, her fascination for rice farming started when she was working for an NGO on a project about the system of rice intensification (SRI). “We wanted to grow rice organically, but we couldn’t find organic fertilizers easily. Organic rice growing in Indonesia is still a monoculture. And the necessary animal manure is hard to come by, as Indonesia doesn’t have much livestock. When I did a Master’s at Wageningen University, I followed courses focusing on crop-livestock systems. Teachers gave assignments to design a system with animals and crops, and I chose rice, ducks, fish and water ferns as the basis to develop these complex rice systems.” 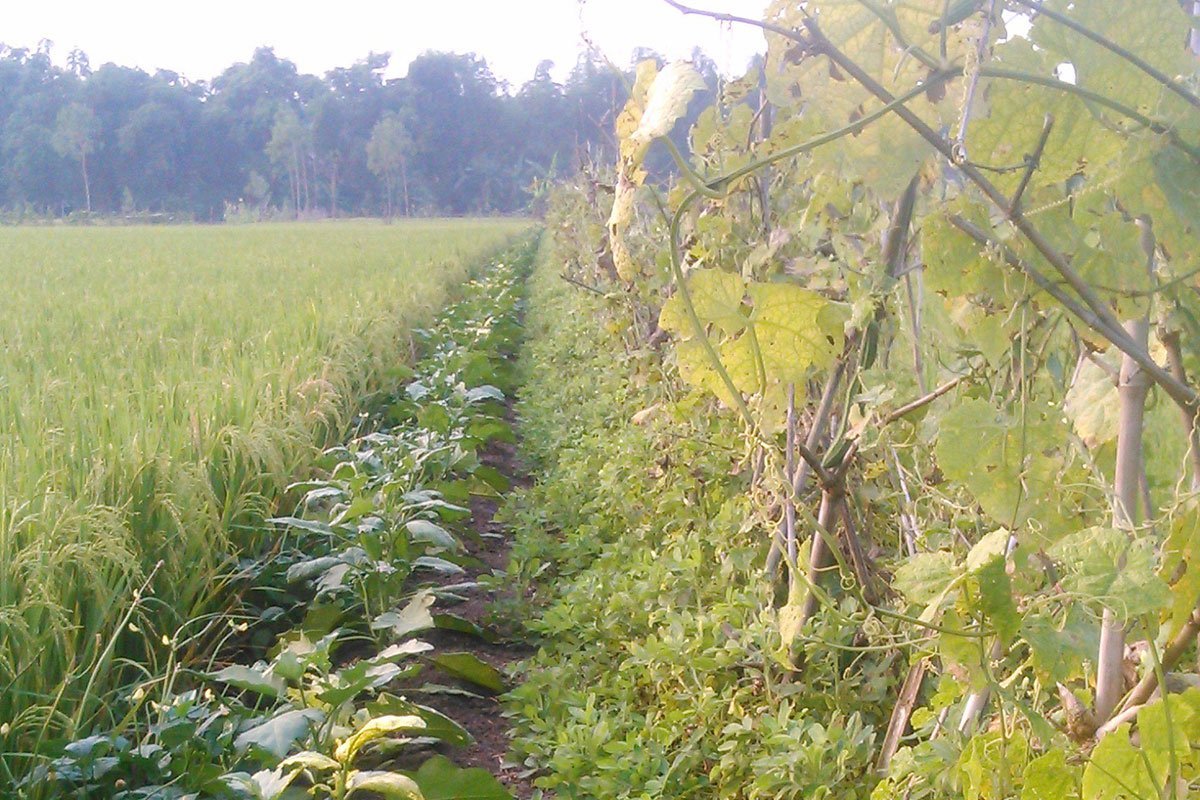 “The yield was very high in this first experiment, but we had to buy feed for the ducks, and we transported organic matter outside the farm to be composted. So, in my Ph.D. research, I added border plants to the system. The approximately 20-30 centimeters of dry land around the rice fields (called bunds) was used for growing duck feed, such as the nitrogen-fixing plant sunn-hemp and corn. We implemented this mixed system on the land of eight farmers in four regions. But after a while, some farmers started using their bunds to grow sweet potatoes, chili or eggplant. The farmers could get more income from selling these vegetables, and they chose to buy the duck feed instead of growing it themselves. It was crucial for the farmers to get this additional income from the vegetables while waiting for the rice harvest.”

The many advantages of mixed farming

Besides the benefits of high yields, resilience in changing the weather and the reduction of the use of pesticides and herbicides, there’s another significant advantage for the farmers. “60% of the costs of growing rice consists of labor costs for weeding”, says Khumairoh. “All the weed removal has to be done by hand. We have many old farmers in Indonesia who can’t find people to do this for them. When the farmers can’t do this job on time, the weeds limit the growth of the rice. With this system, the ducks do all the weed removal, so competition of rice against weed is eliminated.”

Mixed farming works very well, is climate proof and gets high yields. But why are many farmers still hesitant to implement this sustainable rice system in their businesses? Khumairoh: “It is a huge investment for farmers. The rice bund is very small, so they have to invest in labor and materials to make the bund bigger to be able to grow vegetables on it. Then they need to buy ducks and fish and expensive nets to keep the ducks fenced in. Besides the high cost of investment, it is difficult to educate farmers about this production system. Khumairoh: “When I ask farmers why they keep using their conventional techniques for rice farming, they tell me that they get itchy skin from the manure of the ducks in the water. But the pesticides they spray are the root cause of their skin problems.

Despite the trade-off on high costs, however, once you have this infrastructure, the only job you have is to maintain it. You don’t have to pay for herbicides, you don’t have to buy fertilizer, and you save much money and time on weeding.” Farmers need to know how to calculate short-term and long-term investments. Unfortunately, many rice farmers in Indonesia are illiterate. They don’t have good access to information. So, we have to find an appropriate method to transfer this knowledge.”

Khumairoh also teaches Ecological Design and Permaculture at Wageningen University. Did she use permaculture as a design tool for her mixed system with rice, fish, and ducks? “It was not my intention to apply permaculture in my research, but it turned out to be permaculture after all. We take care of the land, the animals and the farmer. Just like the traditional system in a rural region in Java isn’t called permaculture, but it is indeed the same. For centuries, this pekarangan (a form of forest farming) in remote areas is very common and practiced in every household in this region. In pekarangan, you grow herbs and spices next to the kitchen, legumes, cassava, and other tubers, coconut, herbal, coffee, many types of fruit and vegetable trees, chickens and other poultry, a fish pond, et cetera. These families harvest all year round from their pekarangan and have been self-sufficient for ages.”

Watch how the complex rice system of Uma Khumairoh works in the field of small-scale rice farmer Yopi Heriyanto in East-Java, Indonesia.