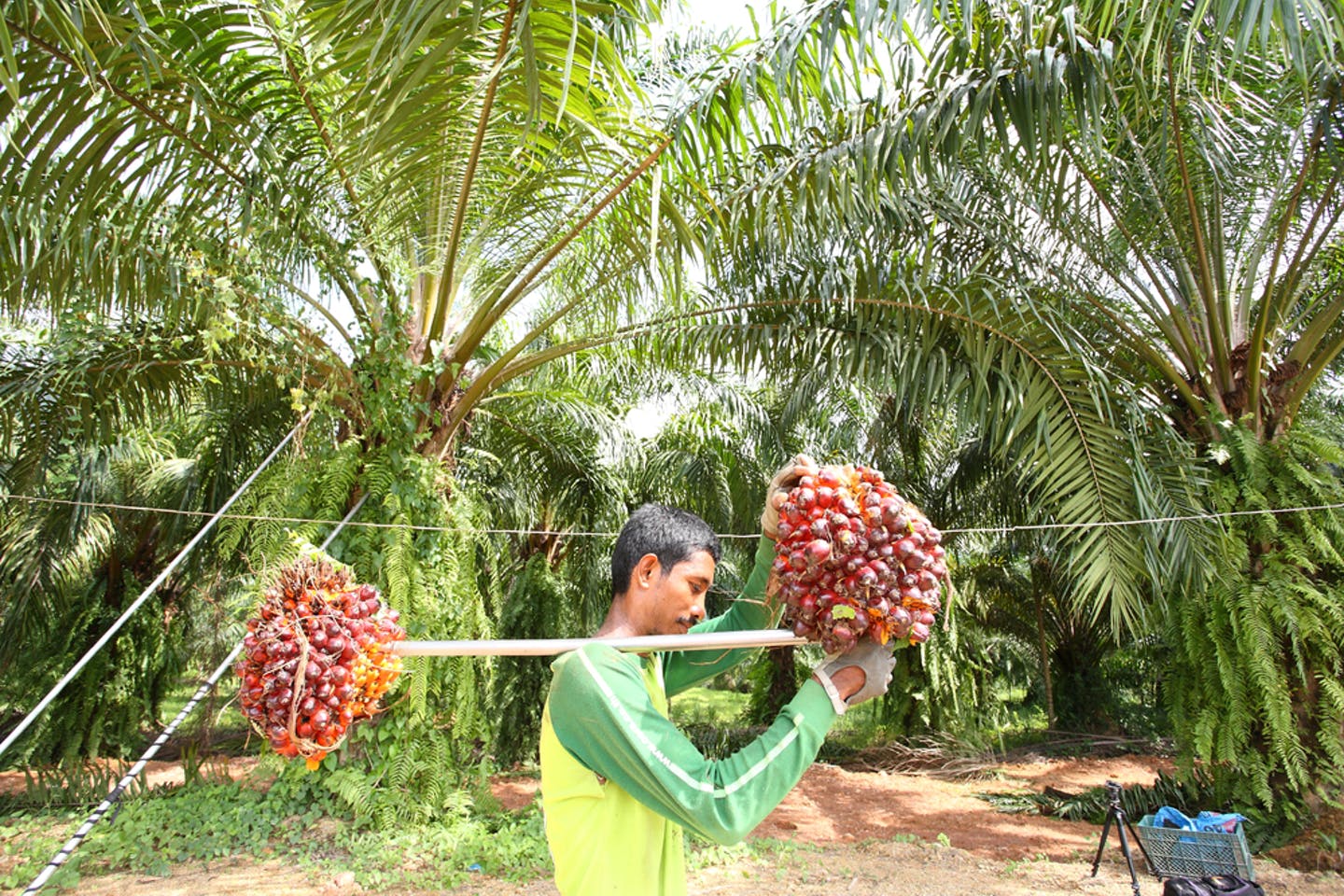 There is one miracle ingredient that can be found everywhere. This very special oil is the foaming agent in your shampoo and responsible for a higher melting point of your ice cream – which you might like. Being very low priced – so perfect for companies to use – this wonderful product has a unique set of qualities, ranging from a natural preservant of products to a stabilizer to foaming  agent. Curious to its name? Palm oil!

We’re pretty much addicted to it: we consume on average 8 kg of palm oil a year. Meeting this high demand has been for some part made possible by palm oil’s high productivity: its superpower. In fact, palm oil produces 9 times more per hectare than soybean oil, and 6 times more than sunflower oil.

Palm oil, on the other hand, has also (often rightfully!) received much negative attention in the light of large environmental and social scandals. As always, the plant is not to be blamed: it’s the ways of contemporary cultivation – the human factor – that is the problem.

This article explores the hidden success of regenerative palm oil. Chances are you might have used one of its products already…

Naturally, oil palms grow where other trees cannot grow well. It is a strong survivor: in tall forests, it will be overtopped but it will withstand and continue producing in spite of it.

Ancient humans perhaps also noted those qualities similar to modern humans. The relationship between palm oil and humans goes back several thousand years. Remains as old as 5,000 years were found in West and Southwest Africa. Fossil Elaeis pollen grains found in sediments of the Niger Delta are identical to those of the present-day oil palm.

Occasional hunters may have obtained oil palm fruits from palms in natural habitats. In a later stage, they may have harvested from the deserted camps – after people planted the first oil palm trees. The oil palm had become a ‘camp follower’ and later shifted to cultivation.

Ancient humans were buried with casks of it. In traditional African medicine, it’s used to treat pain. Exploitation of the generous qualities of oil palm has been happening over millennia already, reminding us how growing oil palms is not only a modern phenomena – reminding us how our highly industrialized and monoculture ways of cultivation is the phenomenon that should be under examination.

Palm oil has been called ‘successful’ – although this is a dismal way to describe it – as it has in 60% of the cases been converted from what was primary (rain)forest (meaning untouched pristine forest that exists in its original condition) and is now expanded to 18 million hectares of monocrop plantations worldwide.

Due to palm oil plantages, half of the Bornean orangutan population has been wiped out in just 16 years. The expansion of palm oil would affect 54% of the threatened mammals and 64% of threatened birds globally. All these species live in (rain)forests, and planting monocultures of palm oil is the major driver of deforestation. Animals and plants lose their habitat: the only species surviving is Elaeis guineensis – and, a lonely truck to pick up the palm oil seeds before pressing.

What is the solution for palm oil?

Let’s face it: the world got addicted to palm oil. And in the way that it is conventionally produced, that has major drawbacks. Palm oil itself is not an unethical ingredient, but the farming practices that many large-scale operations use to harvest it often are.

Combine monocropping of trees and economies of scale with the ability of these trees to grow in poor soils (because oil palm can grow literally anywhere), palm oil ends up to be an extremely cheap product. The magic continues: palm oil is shelf-stable, since it has natural preservative qualities; it’s used in products ranging from red lipstick to orange cupcakes.

So how could we turn this magic of the palm oil tree into a win-win situation for humans and nature? Ensuring biodiversity, remaining productivity, and continued provision of a uniquely diverse and useful product.

The magic of palm oil means that because of its high productivity, the land can be used very effectively and less land is needed for vegetable oil production; and because of its strength, it can endure obtrusive plant neighbours. Hence an excellent species for mixed agroforestry systems!

Though oil palms can survive in poor soils, they prefer specific climatic conditions: year-round hot temperatures, abundant annual precipitation and intense sunlight. No wonder this palm grows best in the tropical zones of Africa – where it originates from – as well as Asia and America.

Please join the tour around continents for the best practices for oil palm in agroforestry!

We will start our journey to explore solutions for regenerative palm oil production in the cradle of the species: Africa. It’s promising that large scale projects at this continent of origin are spreading hope for the oil palm and their local communities, the biodiversity and the global soap market. Dr. Bronners, well-known for its soap brand sources made the commitment to only source regenerative palm oil. Palm oil is their key ingredient as it helps the bars maintain their firmness and stops them from dissolving too quickly.

Gero Leson, Vice President of Special Operation, is closely involved with this ambitious project and explains how this transition for 500 farmers was carried out:

“Our Serendipalm palm oil project in Ghana started with smallholder farmers who were already growing oil palm on rather small plots – on average 2 ha. These plots are surrounded by small plots of cocoa, citrus, maize, cassava. No primary or secondary forest had to be felled to establish new plots.”

After this first phase in which the oil palm farmers became certified organic and being paid a fair trade price, they transitioned towards regenerative practices:

“It was really the oil palm production that triggered our involvement in regenerative agriculture in Ghana. In 2008 we started additional regenerative practices with these farmers by providing loans to improve farm maintenance, then returned organic byproducts as mulch to the fields.”

When mulching was already an implemented practise the step to agroforstry was easy:

“Once we became more involved in organic cocoa production we then decided to promote mixed agroforestry including both oil palm and cocoa, plus other crops, such as cassava and turmeric.”

This would be the other lesson: integrating palm oil trees in agroforestry also means that the local community can focus on their own food security as food crops can be implemented in the system!

A lonely truck picking up the oil palm seeds before pressing is not the future we would like to continue with. Cattle are the perfect company inside the oil palm plantations. One of the solutions for mimicking natural systems is the introduction of livestock to close nutrient cycles.

“Weed control is a big issue. Via the presence of cattle we have been able to introduce an effective biological control. We call the cattle ‘bio lawnmowers’”

The system has led to 68 percent reduction in weed control costs in palm plantations with a rotational grazing management, accordingly Dr. Kabul of the big global palm oil player Malaysia. Furthermore, the manure of the cow is fertilizing the plantation to help reduce external inputs and enrich poor soils.

South America: How to avoid deforestation?

In Brazil, the question was: How can we develop an oil palm industry that is both productive and environmentally friendly? How can we avoid the widespread deforestation which has occurred in Southeast Asia under palm oil production?

A study of oil palm grown in trial plots of ecologically diverse agroforestry systems in the Amazonian state of Pará, northern Brazil suggests it may be possible.

“We want to come up with a design for an agroforestry system that avoids over-shading of oil palm but allows enough shading for secondary species such as cacao and black pepper. Also, we need to determine what species will grow well in local conditions, increase soil fertility and provide mulch for oil palm and other species.”

Locally there was the wish that farmers wanted to be able to grow their staples and cash crops such as cassava, beans, cacao and açai: this formed the basis for the agroforestry design.

Spectacular results after 5 years show how oil palm yields in agroforestry systems are, on average, higher than those of monocrop systems.

Carbon stocks in one of the plots were higher than in secondary forests or conventional agroforestry systems. This reflects the power of the combination of fire-free land preparation, organic fertilization, and the input of plant residues from pruning and weeding.

Amongst other factors, intercrop choices and planting densities are extremely important to be taken into consideration when creating agroforestry palm oil systems. Local indigenous knowledge is key in finding strategies that work to sustainably grow this tree’s magic fruit, and to make sure to maximize synergies and minimize tradeoffs.

reNature has aligned strategies with Wild Asia in Malaysia to build knowledge and experience in rethinking oil palm plantations, with a focus on carbon sequestration and certification. In contrast to conventional plantations, our systems will be nature-inclusive, welcoming a wide range of species benefiting biodiversity and the climate while supporting farmer livelihoods.

Do you want to invest in a transition towards regenerative palm oil production?