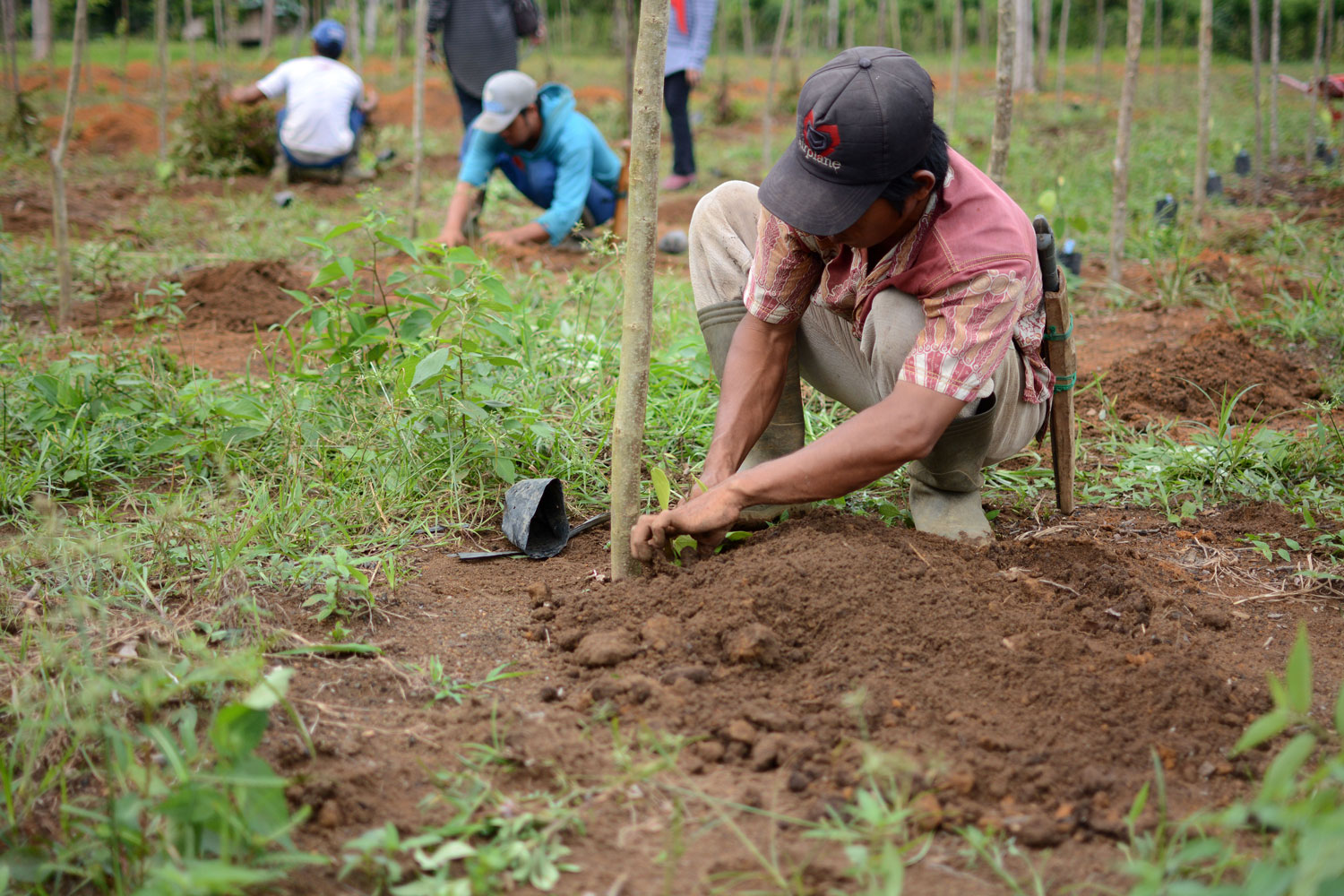 Situated on the island of Bangka, this project focuses on the development of an economically viable Regenerative Agroforestry system. For the Dutch spice company Verstegen and together with our partners from Preta Terra, we are on a mission to redesign the cultivation of pepper. The system also provides multiple by-products, generates ecosystem services and positively influences farmer livelihoods. As part of reNature’s long-term transition strategy, this project serves as a first pilot initiating the adoption of agroforestry practices by more than 500 local pepper farmers in the area.

Surprisingly, pepper does not grow in supermarket shelves. It is actually a plant – a vine to be precise – in need of a solid support such as a branch or stick to hang on. It then produces fruits with seeds that become either white, green, or black pepper depending on how it is processed.

Originally stemming from India, pepper favors shade as well as warm and humid conditions. Indonesia can provide those which is why Verstegen chose it for the production of its white pepper. The latter is obtained through the processing of the fruits’ seeds.

The majority of Bangka’s pepper farmers currently farm pepper in monocultures – one-crop plantations. Degraded soil, as well as the impacts of climate change, are now harming the farms’ productivity resulting in lower yields.

Thus, farmers are increasingly facing income losses threatening their livelihoods. The fact that white pepper has been subject to declining prices intensifies the problem.

Farmers see their ‘last resort’ in abandoning the production of pepper and turning towards oil palm and rubber cultivation instead. This, however, drives deforestation and exposes them to poor working conditions.

Many farmers in Bangka also see themselves forced to participate in illegal tin mining. This is a very dangerous practice and regularly leading to casualties. In 2012, the annual unofficial death toll was estimated to be 78.

Restoring the trust in pepper

Through Regenerative Agroforestry, this project allows Bangka’s farmers to return to the crop they have traditionally worked with: white-pepper. Our diversified system restores trust in the crop. It ensures long-term productivity whilst providing economic resilience and various additional benefits.

This way, we provide a viable and fulfilling alternative to the destructive and dangerous prospects of oil palm farming of illegal mining.

Together with our partners Preta Terra and local PT Chan, reNature has set up an agroforestry Model Farm to showcase a diversified, viable white pepper system that is both replicable at large scale and flexible according to the farmer’s needs.

The plot is located on an old degraded rubber farm – left abandoned and considered as useless. 30 farmers are trained and provided with the capacity to regenerate this land. Through the integration of crops and trees, they are now returning life and productivity.

Our white pepper agroforestry systems allow the 30 farmers to grow vital food crops, such as bananas, next to pepper. This way, the project increases food security and the diversity of locally available nutrition. Farmers have access to a diverse range of crops locally which enhances their diets and brings valuable health benefits.

As pepper farming is becoming more viable again, farmers and their families experience gradual livelihood improvements. The beneficiaries are included in the decision-making process following a participatory approach. They actively contribute with their knowledge and experiences, thus, providing for a better outcome and creating a greater sense of ownership.

The farmers are protected from declines and fluctuations in the price of pepper as the selling by-products can provide additional income ‘cushioning’ potential pepper losses.

Productive agriculture in harmony with life

Our Model Farm consists of over 19 different tree species alone including many natives. Hence, the system supports a far more diverse range of plant life than equivalent monoculture farms. Further, these plants and trees provide habitat for a large number of animals boosting biodiversity locally.

Our system also does not require destructive artificial inputs such as pesticides which benefits insects and other species. Those serve as natural prevention of pests and diseases as different animals and organisms keep each other in check.

The project also benefits the climate. Our system stores more carbon than an equivalent monoculture, whilst the trees will regulate the micro-climate. Further, they hold moisture and humidity lowering the risks of potential droughts.

Another important environmental benefit of this project is the fact that it avoids further deforestation and land degradation. Increased system profitability will prevent farmers from clearing new land, for instance for the cultivation of oil palms and stop the degradation of soil.

Currently, the Model Farm comprises a relatively small plot farmed only by a share of all the pepper farmers in the area. The idea is to create a system that inspires through its positive outcomes.

Once matured, the farm will serve as an example for best practices showcasing the benefits to the 500 white pepper farmers in the area. In the long term, the plan is to scale up the approach whilst increasing the impact and the number of beneficiaries.

Participating farmers will have the skillset and capacity to forward the necessary knowledge to their neighbors.

Indonesia is in need for solutions to protect its highly important ecosystems. 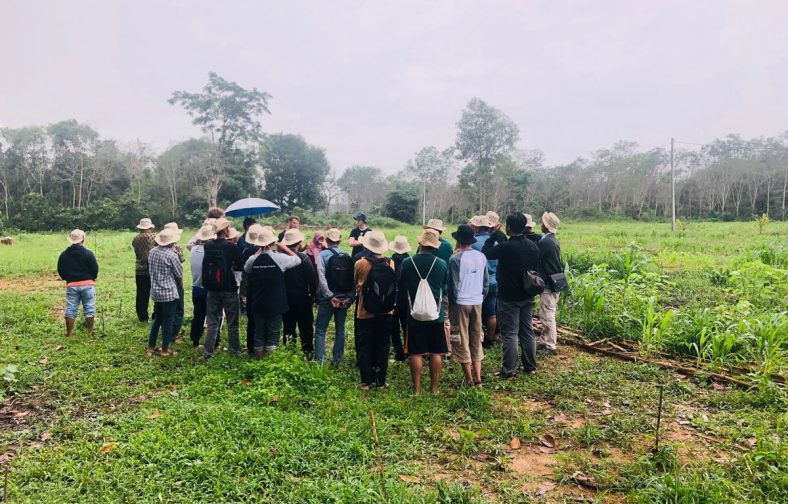 Week 7: April 20th-27th. Bangka White Pepper Agroforestry This week, it was my turn to join the team at the white pepper farm on Bangka Island and follow t...
Read more 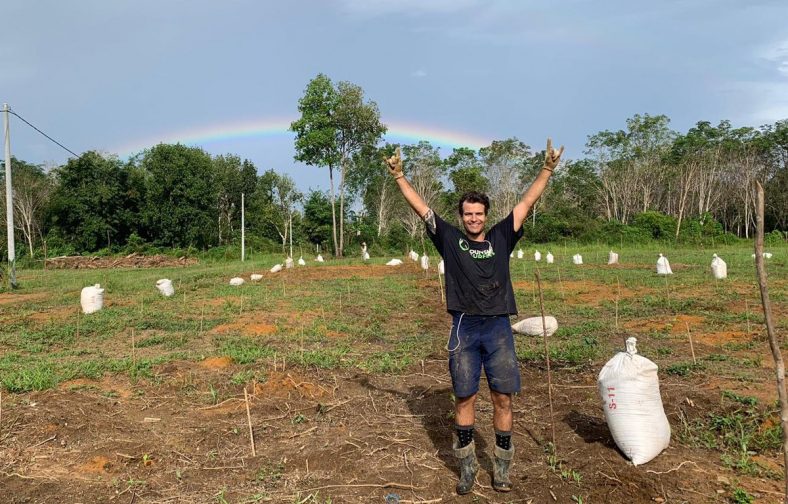 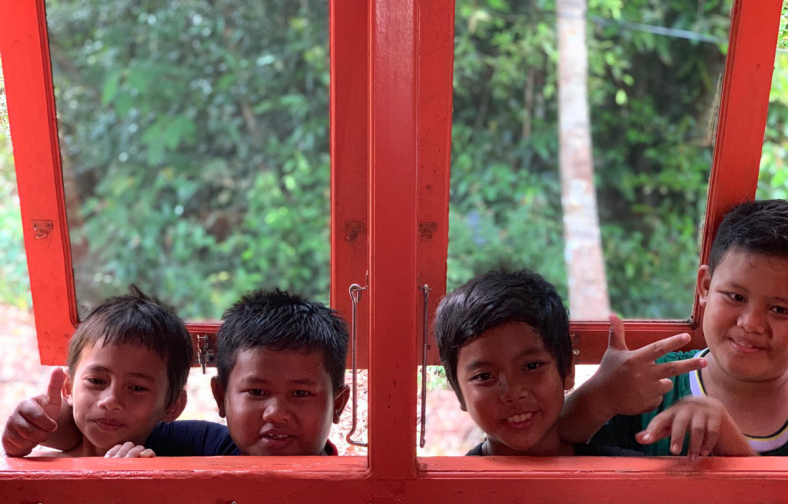 Indonesia is known a unique set of ecosystems characterized by abundance and diversity. Unfortunately, it is also known for severe deforestation and forest degr...
Read more 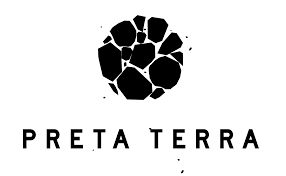 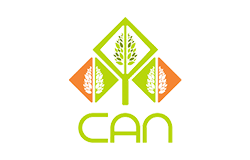 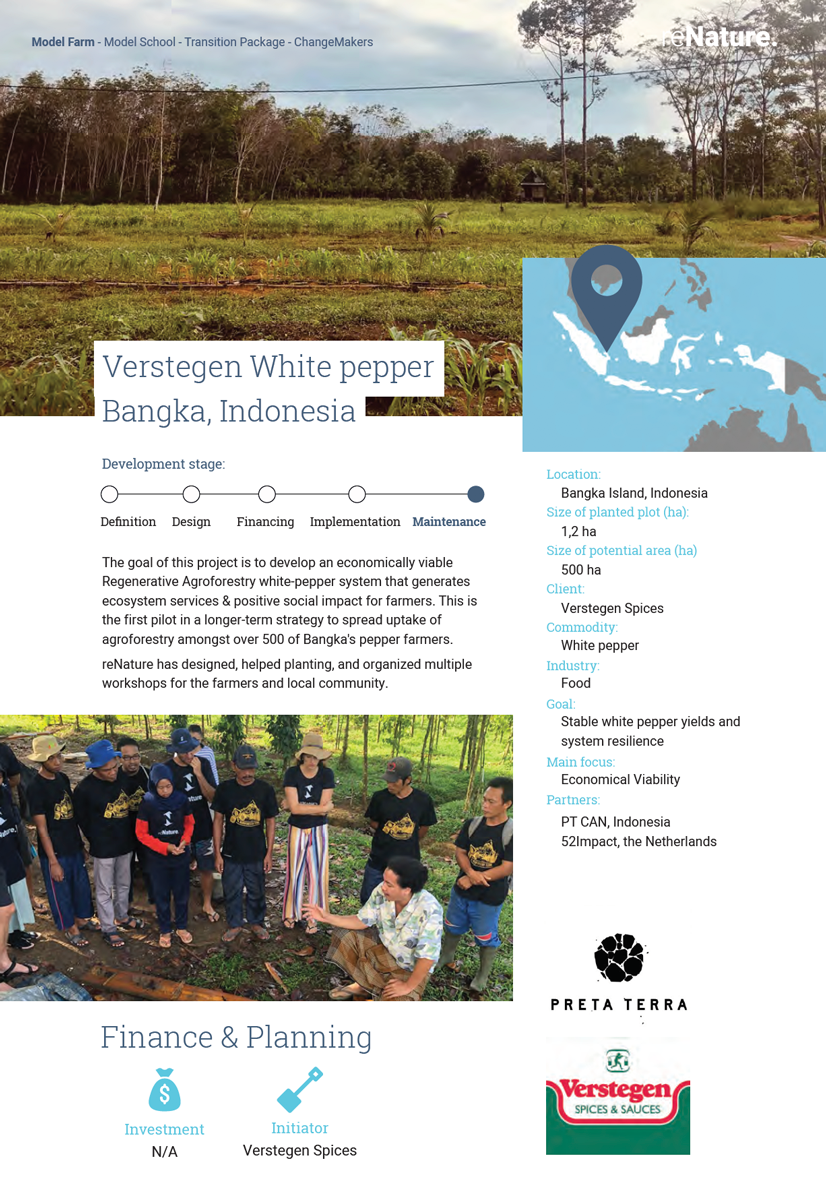 Want to read the factsheet? 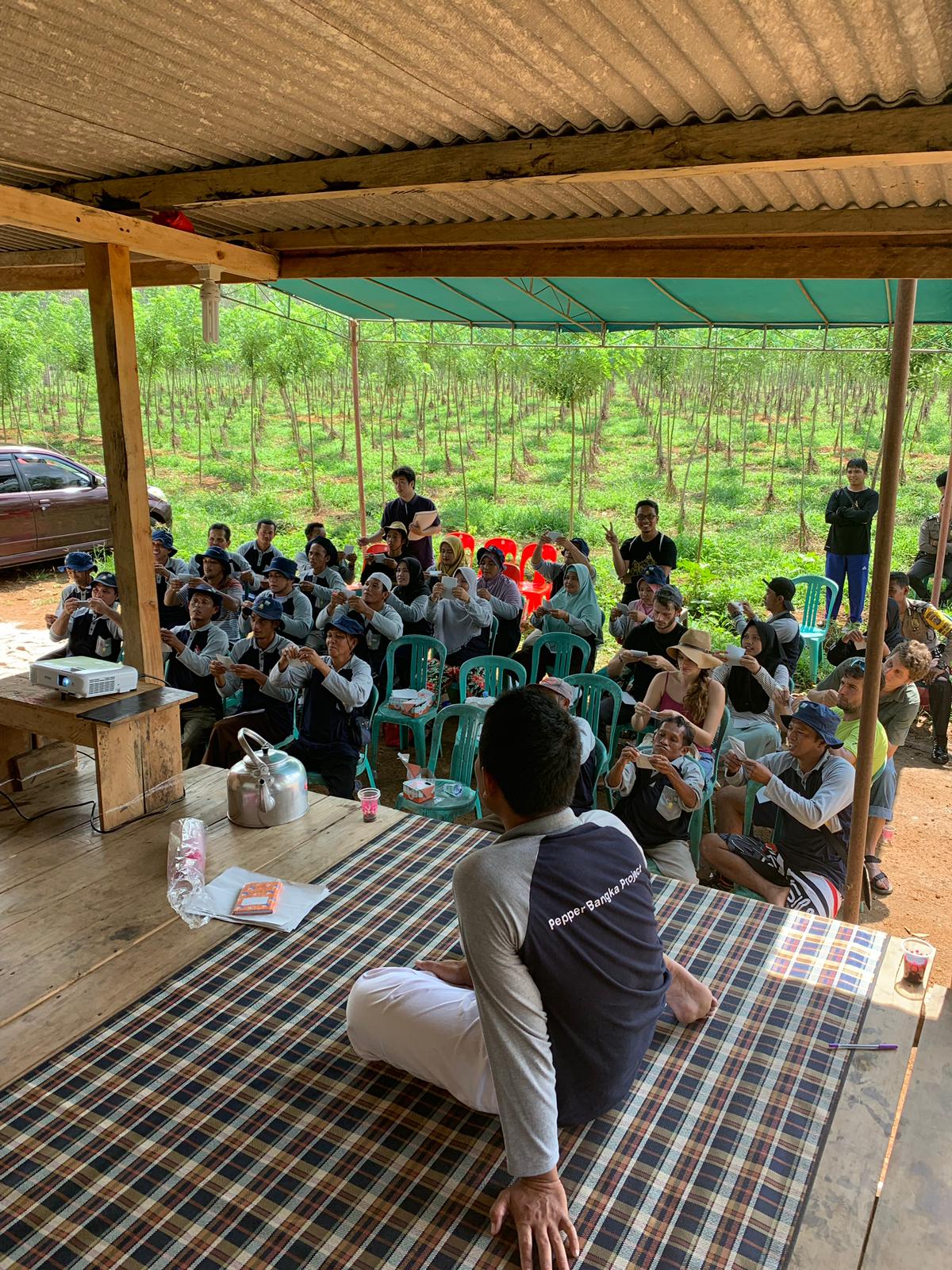 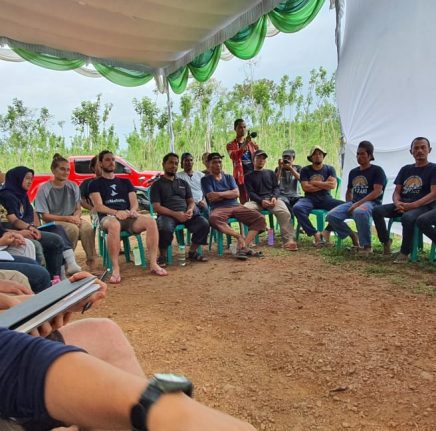