Den Food Bosch, a Food Forest in the Northern Hemisphere

What exactly is a food forest? It sounded like a hipster vegan restaurant to me at first. Turns out I was far off. Instead, a food forest has sustainable agriculture as its goal; mimicking natural ecosystems while growing healthy food and restoring nature. Sounds a little overwhelming? I spoke with Paul Müller, founder at Den Food Bosch and board member of reNature, to find out more.

Studying at HAS University of Applied Sciences in the Dutch city of Den Bosch, three young men and a lady  started Den Food Bosch, a food forest project in 2016 to show alternatives to monoculture. The idea started gaining traction through pitches and presentations and received funding from Agrifood Capital and the province of Brabant in 2017. Ernst Goetsch (essentially an environmental celebrity, have a google if you want to know more) visited the Netherlands and was a source of inspiration for the food forest. By the time, more young food forest enthusiasts joined the team and the food forest took off.

A forest is something we know from fairy tales, with trees being silent witnesses to stories over the centuries. So how do you create a forest from scratch? On 19 November 2017 the first plants were introduced, followed by ten weeks of hard work to set up the entire food forest. Now 3,500 trees and shrubs make up an ecosystem on 1 hectare of land – that’s some serious real estate. The land is rented from ‘Waterschap de Dommel’ who are super interested in the positive effects of food forests on water.

If you’re like me, you may vaguely recall the term “crop rotation” from high school geography class, but this polyculture method takes things two steps further. Plants help each other grow since different crops supply and take up different nutrients. This forest concept isn’t simply rotating crops around, it’s an integrated ecosystem.

As beautiful as forests are, this one is no vanity project. I found out that farmers are having serious issues because water is not being properly absorbed by the fields; the soil is too compacted and water infiltration is therefore difficult. A food forest improves the ground’s water holding capacity, which is great especially for a country below sea level, like the Netherlands.

Soil aside, the forest also boasts many food advantages. All food forest produce is free from both herbicides and pesticides, no agrochemicals or heavy machines are used, and there is no soil compaction. Surprisingly, there is also no tilling of the soil, meaning it is not disturbed and overturned mechanically. As long as there is still space left in between the trees, the project intends to grow cabbage, squash, beets, corn, beans, peas, and the like – also without tilling the soil.

Poly means ‘many’ and the forest does this word justice with a couple of hundred different species. Guided tours are coming soon, along with workshops. The actual harvesting will be done by the food foresters of the forest; they know what is ripe and ready.

So, a food forest is not a hipster restaurant, but a project with a triple bottom line instead; people, profit and the planet do not exclude each other here. People will benefit from healthy untainted food and farmers can retain their profits because they do not need to drop off the harvested goods to be processed and sold by big multinational companies. Furthermore, this helps to establish a local identity and keep profits local as well. The planet benefits because the food forest is a form of permaculture, a system that will sustain itself. Of course, animals are also part of the equation.

New plant combinations such as apple trees in companion with hazelnuts and biomass trees like birches promise a diverse future and a mix of alder, poplar and medlar can act as windbreakers and provide shelter for wildlife.

Many systems, from economic to environmental ones, are collapsing around the globe. Things need to change drastically, and fast. A food forest is a first step towards sustainable stories that hopefully both our future generations and trees will witness. 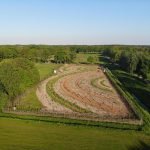 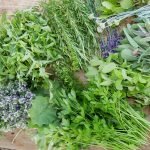 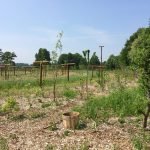 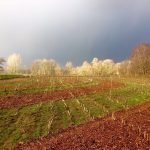 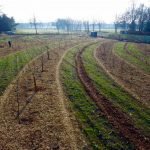 Paul Müller and Janine Raabe offer design, project development and implementation of regenerative agroforestry systems. For more information on this and other projects please visit theforestfarmers.nl